In circuses, the wellbeing and dignity of animals, which are both legally protected in Switzerland, are seriously impaired solely for the purpose of entertainment. It is high time for all circuses to adopt a modern approach to entertainment and drop wild animals in their shows. The new campaign by Vier Pfoten, the Stiftung für das Tier im Recht (TIR), and ProTier underpin the call for a statutory ban on wild animals in circuses.

The 2019 circus season has begun: And once again, circuses are parading big cats in their rings. Despite having a relatively progressive animal welfare legislation, Switzerland lags far behind other countries: 28 European countries have already placed considerable restrictions, even bans, on wild animals in circuses.

In contrast, Swiss circus operators are permitted to fall significantly short of the minimum requirements set forth by the animal welfare legislation over considerable periods of time. "Subjecting animals to highly questionable training methods and forcing them to perform unnatural and humiliating tricks constitutes a disregard for animal dignity", says Vanessa Gerritsen, deputy executive director of TIR. Instead of providing urgently needed protection to these species, which are often under severe pressure in their natural habitats, they are humanized and portrayed as goofy and cuddly toys or as ferocious beasts in circuses.

"The petition signed by over 70,000 people and presented to the Federal Council in March 2018 shows that it is no longer ethically justifiable to have wild animals in circuses and calls for a long overdue national ban on wild animals in Swiss circuses", says Monika Wasenegger, executive director of ProTier. In its reply, the Federal Food Safety and Veterinary Office (FSVO) argues that the strict legal provisions governing wildlife facilities take sufficient account of the animals' wellbeing and that there is therefore no need for a ban on wild animals in circuses. This leaves it up to the circus companies to ensure the wellbeing of the animals, which is simply unacceptable from an animal welfare perspective.

Lucia Oeschger, campaign leader at Vier Pfoten Schweiz, explains: "From an animal welfare perspective, there is no justification whatsoever for the practice of breeding wild animals such as lions and tigers with the sole purpose of using them in the entertainment industry. We will therefore continue to push for a ban as demanded in our petition to the Federal Council".

The compelling new campaign, which was developed in collaboration between Viva Colores Schweiz and Nachtlicht Creative GmbH is meant to give a further boost to demand laid down in the petition. In order to finally push through a ban on wild animals in circuses, it is imperative that we raise further awareness among the general public and the parliament regarding the the lifelong suffering of wild animals used for entertainment. 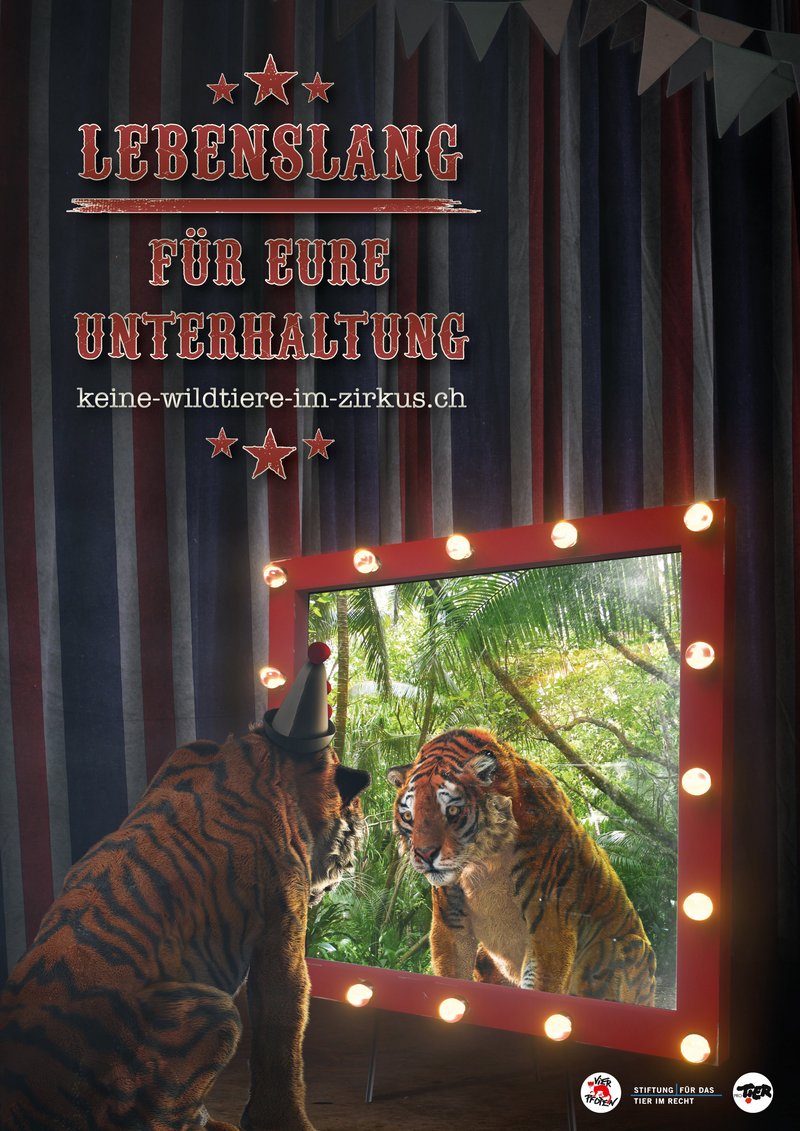