On February 1, an international meeting on animal welfare law in the European Union and its member states was held in Brussels. On this occasion, the Stiftung für das Tier im Recht had the honor of speaking about the importance of the introduction of animal welfare on a constitutional level.

The conference with the official title "Constitutional and Legislative Aspects of Animal Welfare in Europe – The Animal Welfare Action Plan as a Political and Legislative Challenge" was organized by "Vier Pfoten International" in Brussel's Europian Quarter and represented a platform for animal welfare law experts from the institutions and different member states of the European Union. The meeting aroused noticeable public interest and was also followed by exponents of the European Commission – the most important authority for legislation within the EU – and several members of the European Parliament.

After the official greeting words of the European Commissioner Markos Kyprianou (Cyprus), the conference was opened by Jo Leinen, a German member of the European Parliament and important expert in environmental and constitutional law, with his keynote speech. This was followed by reports from Despina Spanou (Cabinet), Dr. Andrea Gavinelli (Animal Welfare Department) and Dr. Hinrich Meyer-Gerbaulet on behalf of the European Commission. Further contributions came from the theologian, Dr. Heike Baranzke, of the university of Bonn and different animal welfare law experts, such as Hans-Georg Kluge, David Bowles (RSPCA), Dr. Maya Neidenova and Dr. Despina Fruth Oprisan. Bernhard Kühnle, Director of the German Ministry for Food, Agriculture and Customer Protection, also held a speech. The conference participants discussed numerous points, especially aspects of animal welfare law and politics, of the Union's activities and the European Animal Welfare Action Plan (AWAP). For details on the conference program, please click here.

It was a great honor for the Stiftung für das Tier im Recht to be invited as the unique exponent from "outside Europe" – meaning from a non-member state of the Union – and to actively participate in the conference.

Dr. Gieri Bolliger from TIR, who has written a comprehensive dissertation about animal welfare legislation in Europe, addressed the importance of the introduction of animal welfare on a constitutional level in his speech. He highlighted that only a few European countries (Switzerland, Germany, Austria, and Slovenia) have so far made this step. In Switzerland, animal welfare is anchored in the national constitution (Bundesverfassung) and has thus represented a state goal since 1973. Additionally, animal dignity has been guaranteed by the Swiss constitution since 1992. With this constitutional system of animal welfare, Switzerland could be a good example to other countries and to the European Union. Here is a brief summary of Dr. Bolliger's speech: Summary 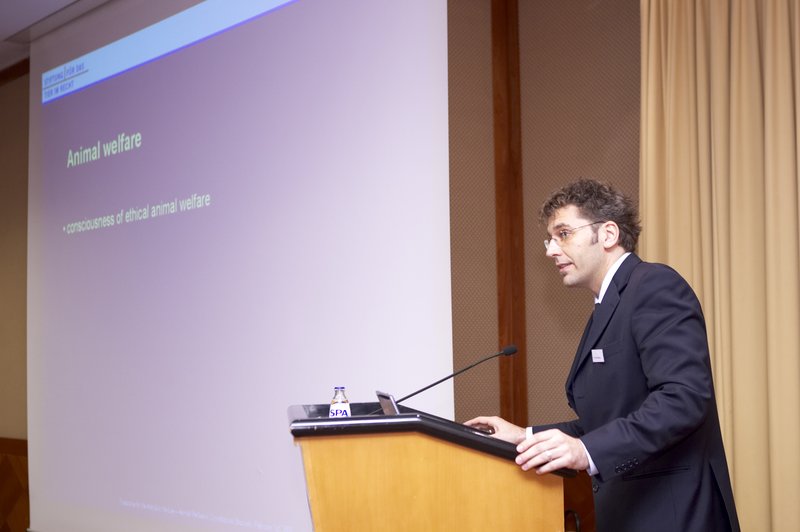